Todd Legg told me that saying and I found it rather humorous.  Sonoma is definitely a good place to go to find great wines, and vinegars.

We moved to Petaluma Elks for 5 nights. $25 a night for full hookups.  Elbow room and a huge parking lot behind for dog running.

Our first day there Todd’s brother, Bruce, his wife, Nancy and grandson, Alexander stopped by for a visit.  We all went together to Rafy’s Pizza for lunch. Rafy is the son-in-law of Bruce and Nancy.  Rafy spent time in New York City where he learned the fine art of creating NY pizza. 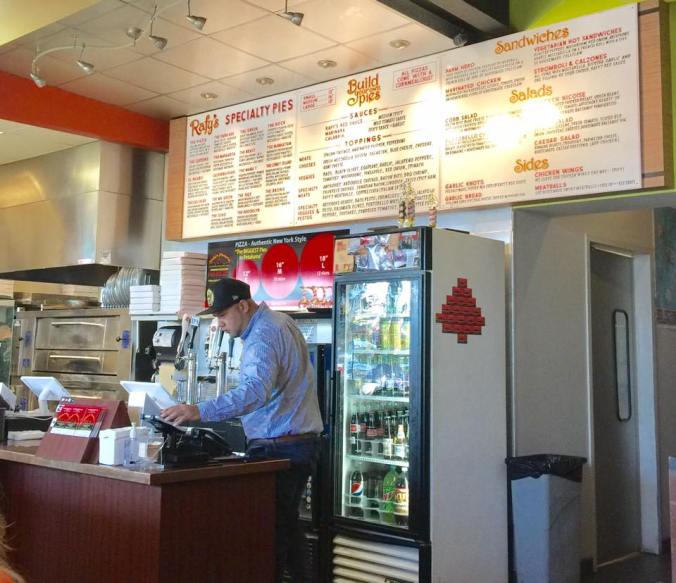 Next stop was the Sonoma Portworks.  Tried a couple of their ports which were good, but what I was really impressed with was their vinegars.  One was made with muscat grapes and one with cabernet grapes. The flavors! Can’t wait to try cooking with them…or even drizzle them over fruit or ice cream. Yum!  Next door was a distillery, both the portworks and the distillery were dog friendly.  Petaluma has over 30 restaurants, breweries and wineries that are dog friendly. Definitely a pet friendly town. 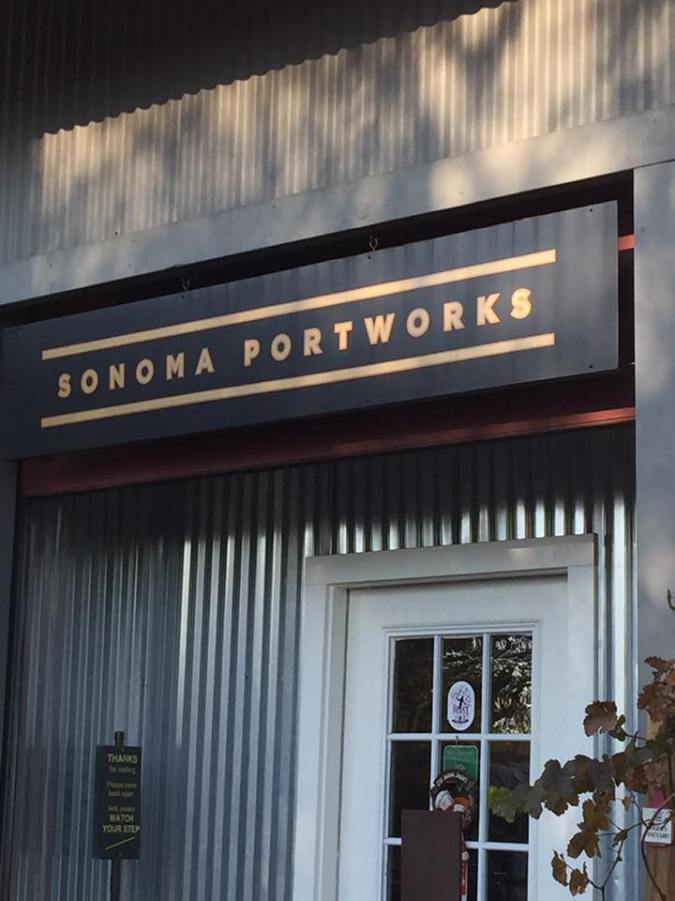 The next day we headed to Glen Ellen to tour Jack London State Historic Park.   The park is also known as Jack London home and ranch.  I so enjoyed reading Jack London’s books growing up, especially Call of the Wild and White Fang.

I was really looking forward to exploring this park.  Sadly, but understandably, they had moved all the museum pieces to a safe location due to the recent fires.   We could still walk around the Beauty Ranch and view the cottages, horse barns and surrounding beautiful countryside.

The Wolf House ruins are there.  The Wolf  House was Jack London’s dream house and he started building it in 1911.  It was 15,000 square feet and had 26 rooms and 9 fireplaces.  Unfortunately, the house spontaneously combusted, one hot August night in 1913. They never had a chance to move in and he died before he was able to rebuild. Both he, and his wife, Charmian loved entertaining and having guests stay at their ranch.

Also along the trail is a gravesite.  “One day, when Charmian and Jack were riding over their property, they came upon the grave site of two pioneer children-David and Lilly Greenlaw. David had died in 1876, the year Jack London was born. Jack was quite moved by the lonely place where the children were buried and he said to Charmian that he would like to be buried in this place if he should die before her. So when Jack died later, Charmian had his ashes placed under this large volcanic rock. When Chamian died, her ashes were placed next to Jack’s under the same rock.” 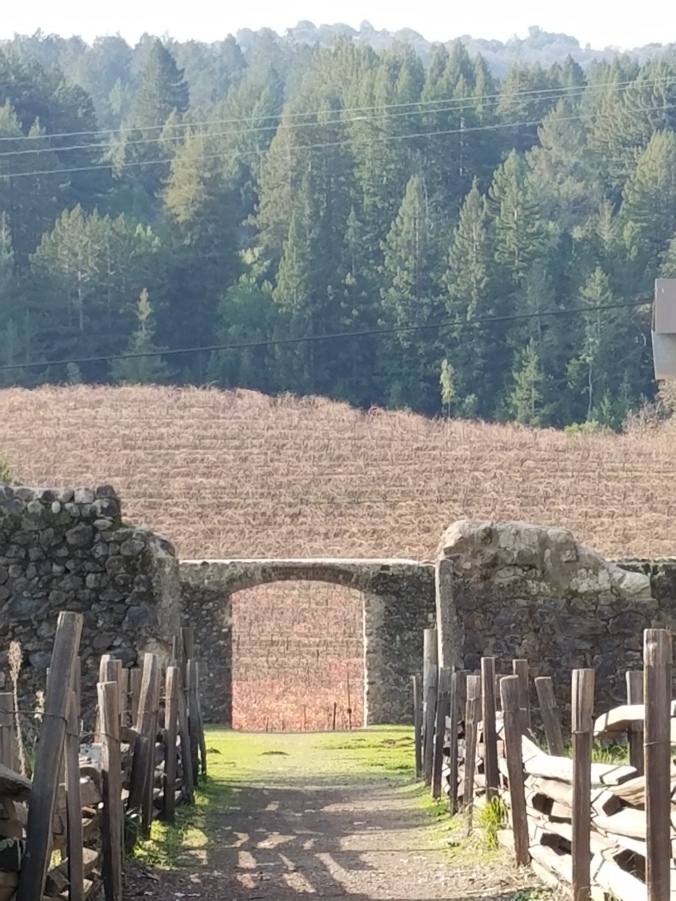 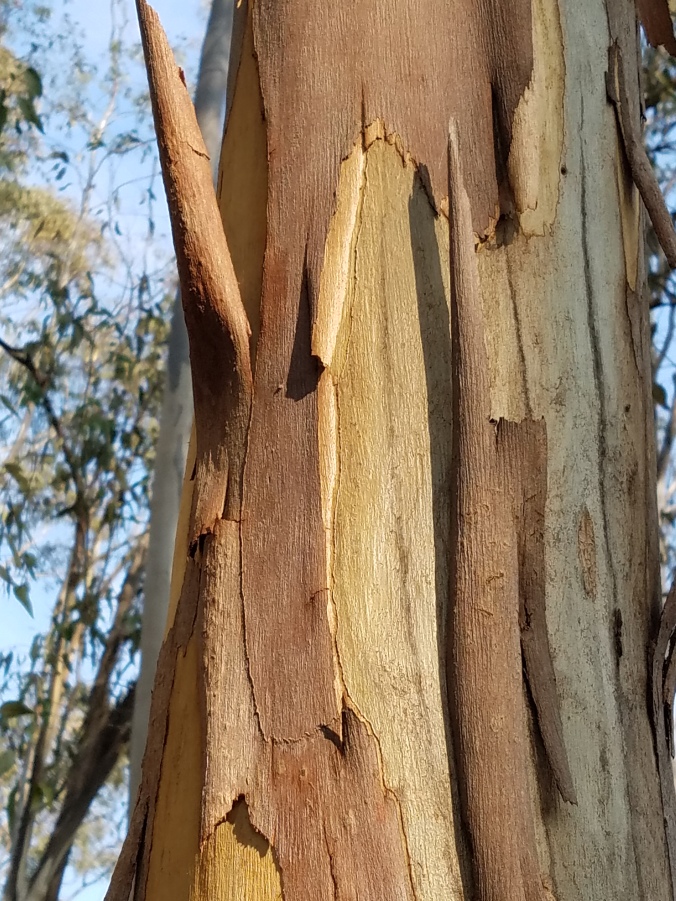 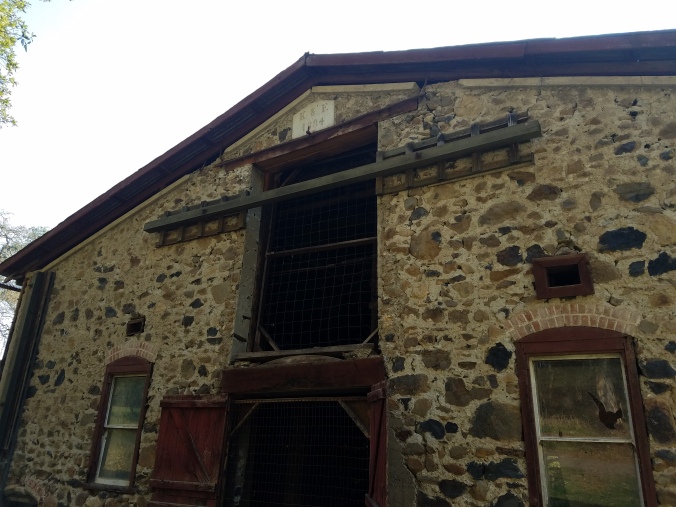 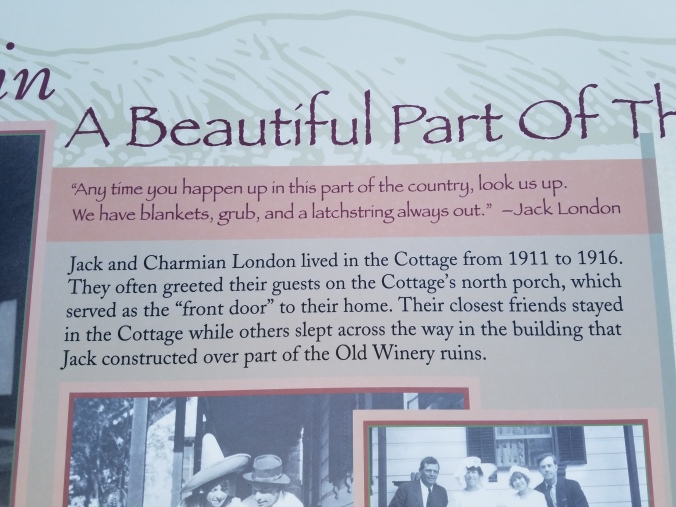 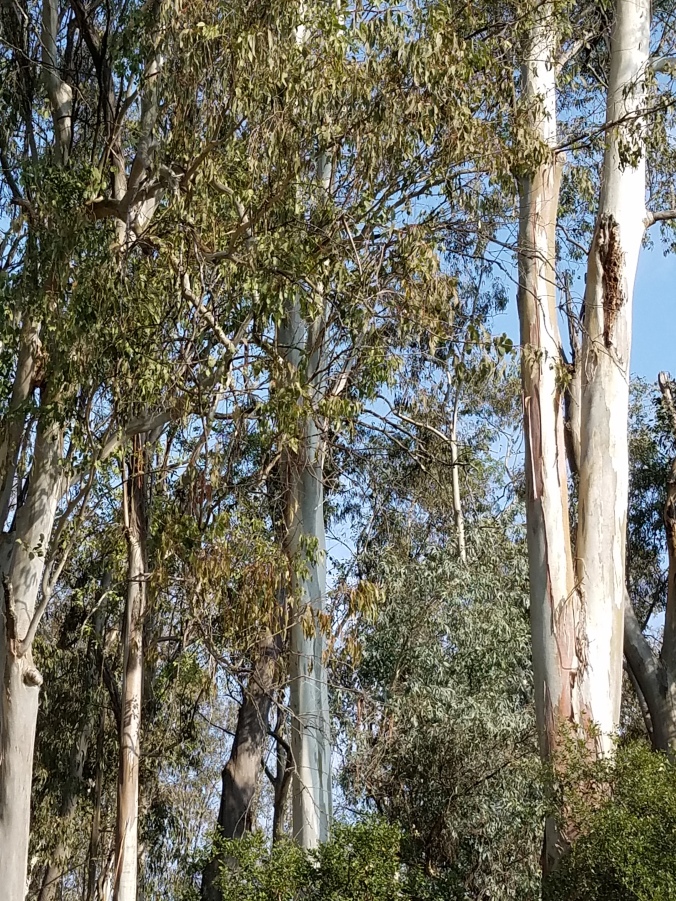 For lunch we went to The Girl and the Fig,  a French restaurant in Sonoma.  Inside there is a beautiful antique bar and a country feel.  We chose to share a cheese & charcuterie platter.  Titled “The Works” we let our waiter choose 3 different selections of meat, and 3 different cheeses.  The meat and cheese is accompanied by apples and fruit compote, spiced nuts, house made fig cake and a baguette.  To drink I wanted something “figgy” so I ordered a Fig Kiss.  It was concocted of Figcello di Sonoma, St-Germain Liqueur and cranberry juice.   It was refreshing an oh so delicious. 🙂 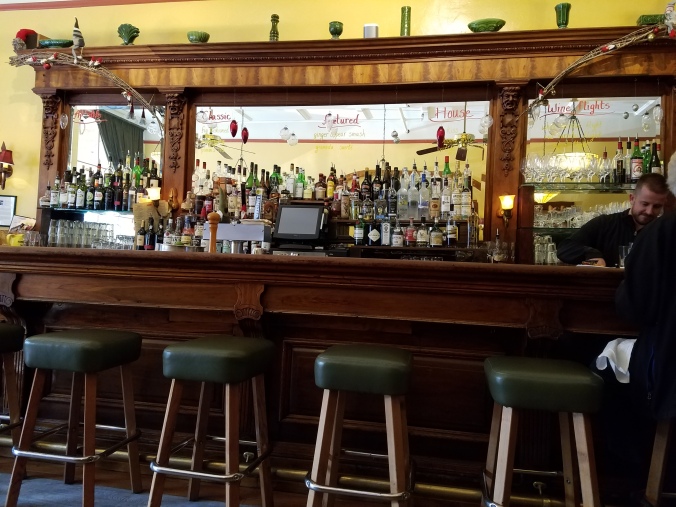 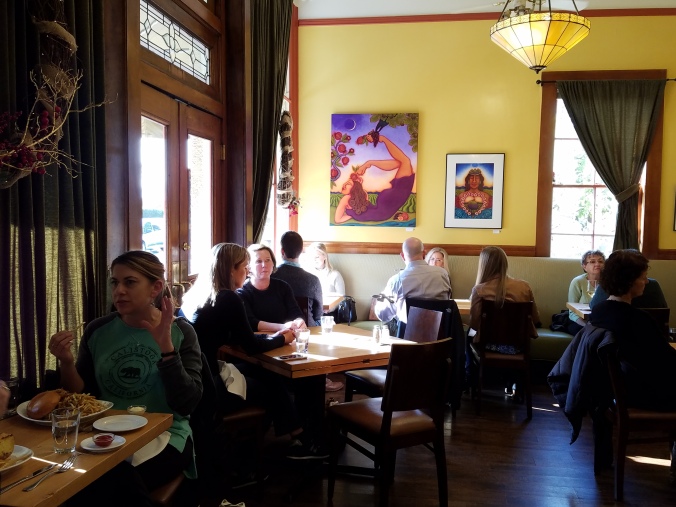 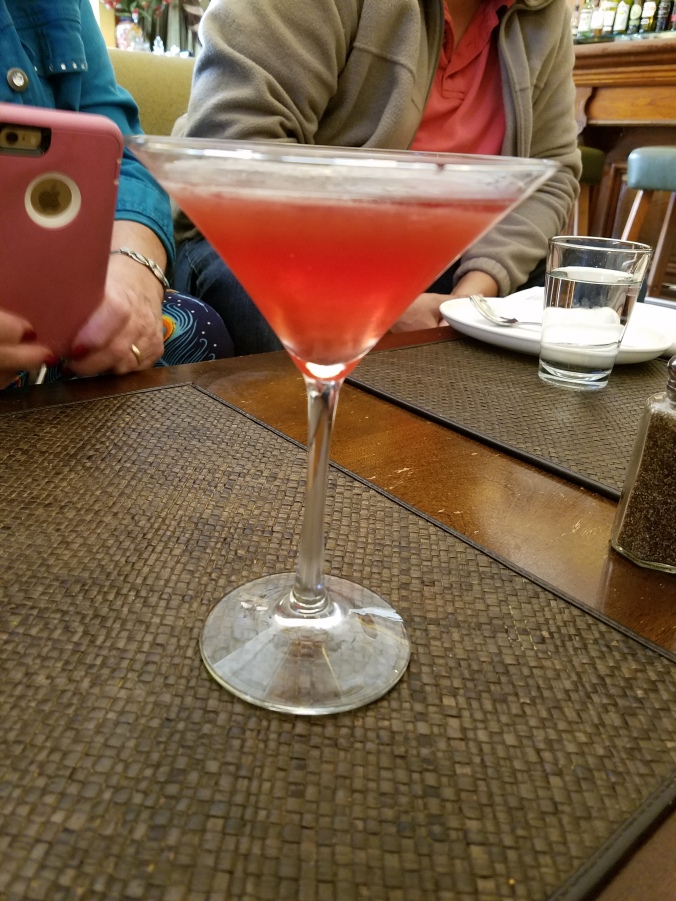 We had a short stop at Sebastiani winery,  enjoyed looking at the wooden barrels with their engravings and the painting on the wall by the fireplace. 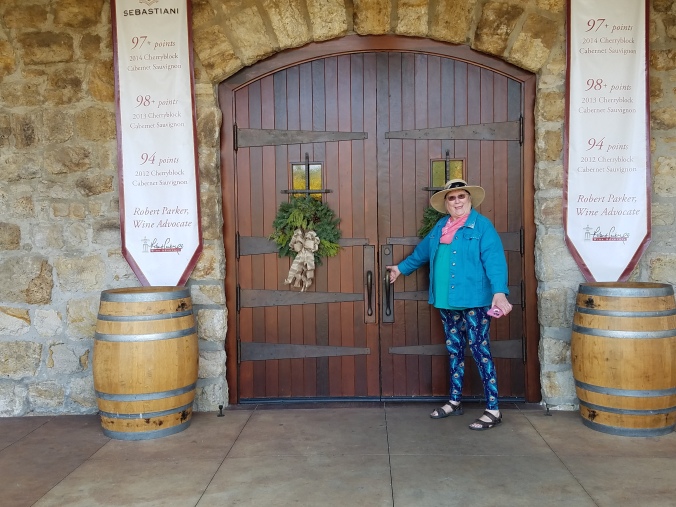 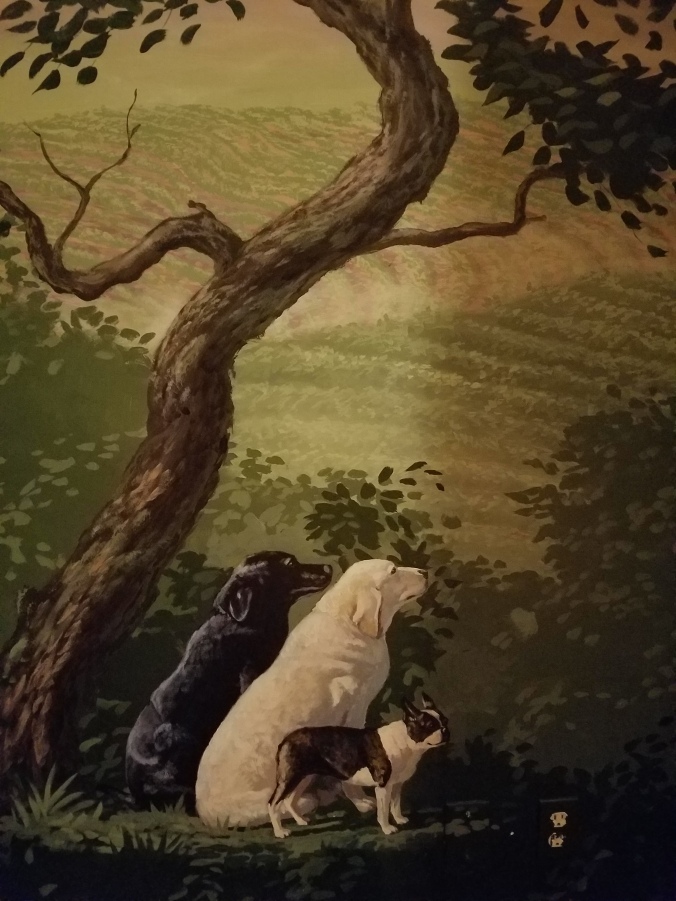 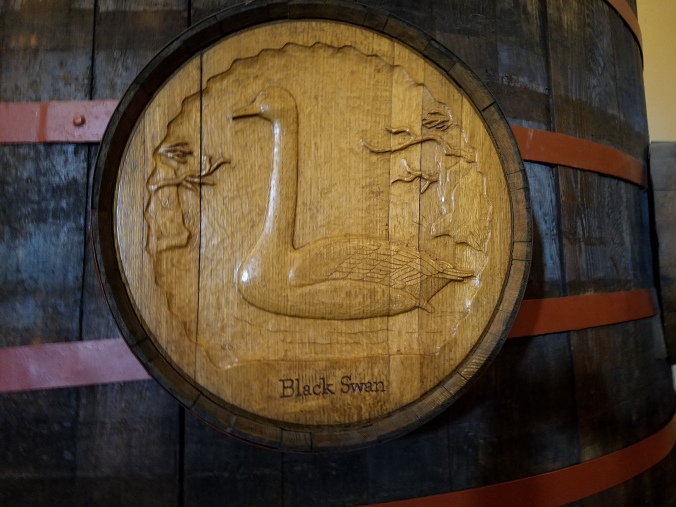 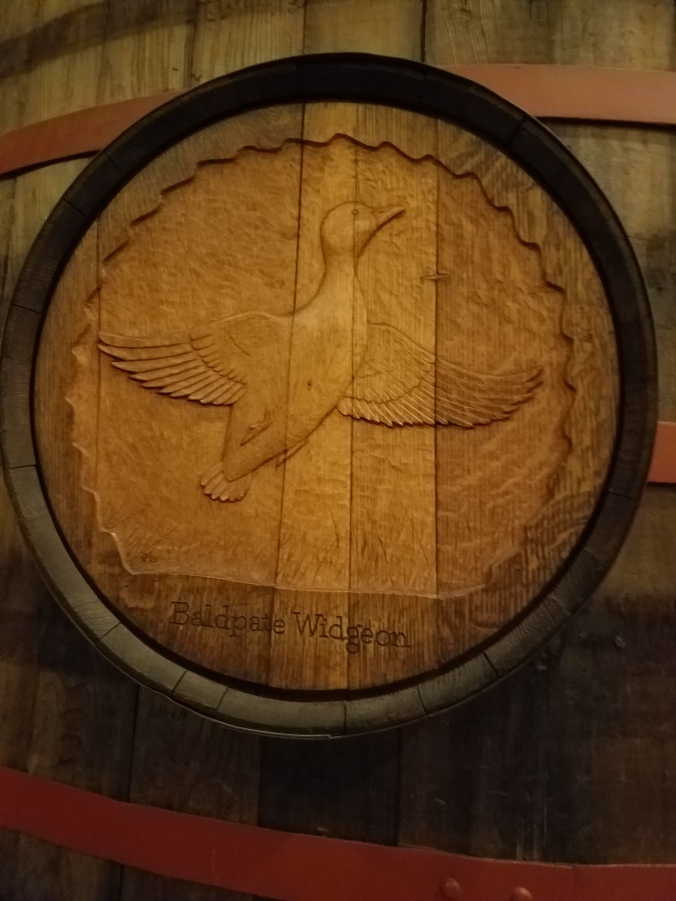 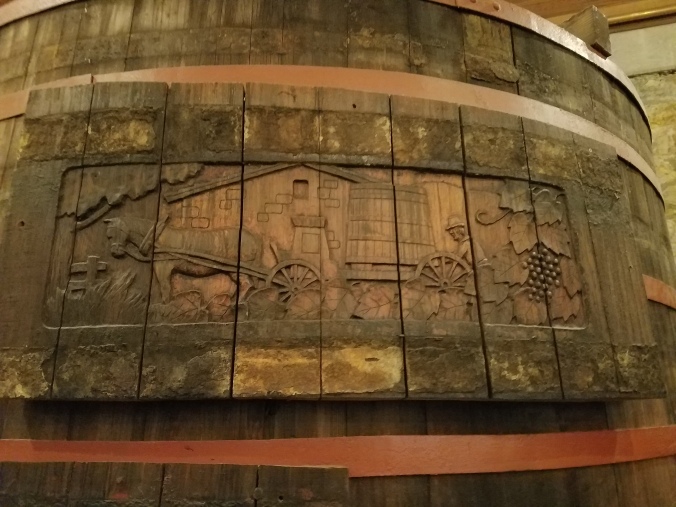 I spent a day of cleaning the coach and Jeep, the next day…and it took ALL day!  For a reward we went to Lagunitas for dinner.  It’s a brewery that has a great open feel and is very dog friendly.  They have grassy areas and water bowls set about.   A band was playing some great danceable music and they had an eclectic menu.  Todd and I both chose the the soy glazed chicken street tacos.  The tacos came with pickled onions and Asian slaw.  Delicious! Janet had the Dog Town Garden Sandwich.  She said it was also very good, and basically a salad between two pieces of bread.  I chose the Brown Shugga’ “Originally a failed attempt at our 1997 batch of Olde GanrlyWine Ale, resulting in an all-new-beer-style we like to call…. Irresponsible. ”  It was a enjoyable brew. 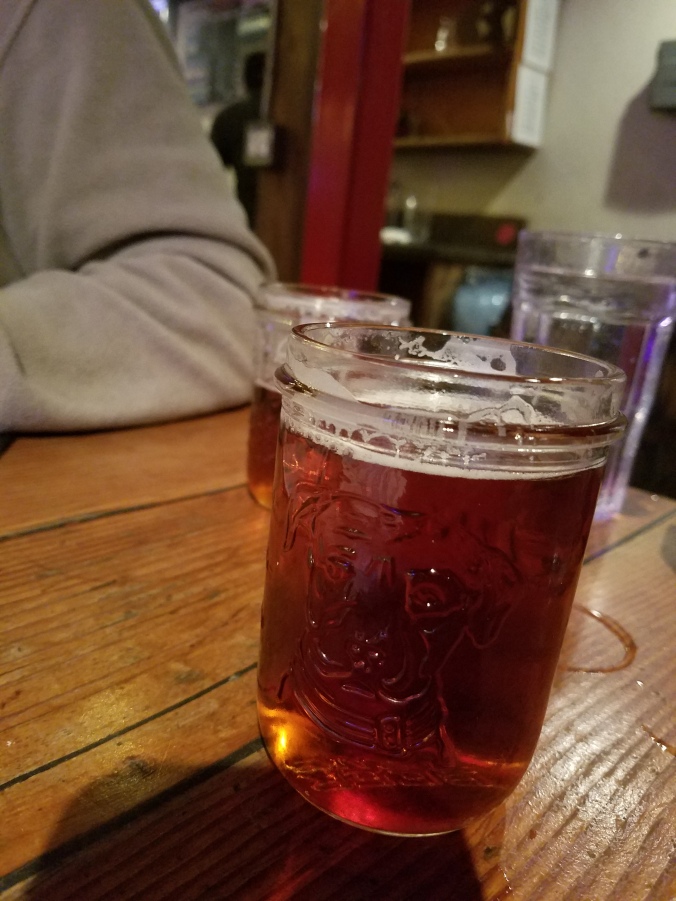 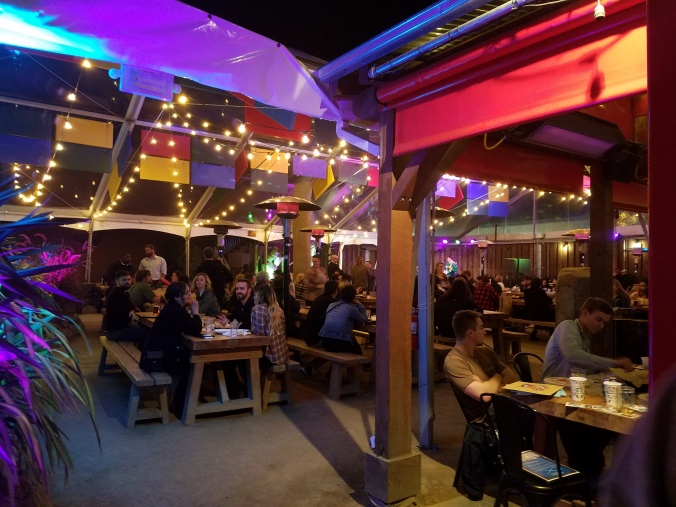 Back to the coaches to get a good nights sleep before heading to the Salinas Elks for two nights.