Phoenix, a huge metropolis in the desert….I’m not a city person, and I’ll admit it.  I don’t mind visiting a city for a couple hours or a day, but longer than that and I don’t do it willingly.

We were actually driving to Scottsdale to camp at Westworld and attend the Arabian Horse Show that is held there every year.  Phoenix/Scottsdale drivers put any of the other crazy drivers I’ve seen to shame (and I’ve driven Los Angeles, the east coast and in Europe).  Rude, pushy, driving 10-20 miles over the speed limit, I couldn’t wait to get the RV parked.  It was definitely better when I was just driving the Jeep, but still could be challenging.

Camping at Westworld isn’t bad…just power and water, with a dump.  You’re basically camping in a parking lot. The best spots, if you have a dog, is along the polo field.  Great place to run your dog, there are no fences though… so a recall is required.  There are leash laws, so be aware…of course there are signs around for fines for not picking up after your dogs and I was shocked at the amount of dog feces that covered the place from the folks attending the horse show.  Price $28.48 a night which includes tax. 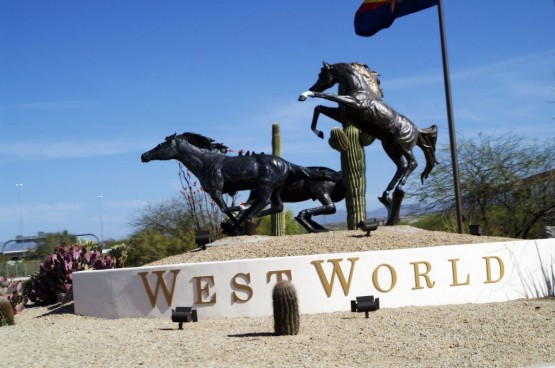 There are numerous dog parks, but plan on having lots of company.  Same with hiking trails, parking lots are full with hikers, walkers and runners on the known trails.

Being a desert community, many of the restaurants have outside dining and some are pet friendly. Be sure and call ahead.

A couple of links with dog friendly places and hikes:
https://www.visitphoenix.com/blog/post/dog-friendly-phoenix/

There are some great museums to check out, I didn’t find the time (or want to spend the money) to see any of them.

We did take a drive to Carefree, which has a lovely park with cactus and succulents from around the world.  An interesting sundial takes center stage, at the gardens.  It stands 35 feet tall, extends 72 feet and is 90 feet in diameter.  It points to the north star.  The sundial was completed in 1959, and is one of the largest sundials in the US.   It was designed by architect Joe Wong and solar engineer, John Yellott.  The huge dial is made of steel and plated with anodized copper and the metal gnomon, the shadow-casting portion of the dial rises 35 feet above the plaza.  There is seating all around the park, a couple with outdoor fireplaces for a cozy evening visit.  The park is dog friendly with poop bag/garbage stations. 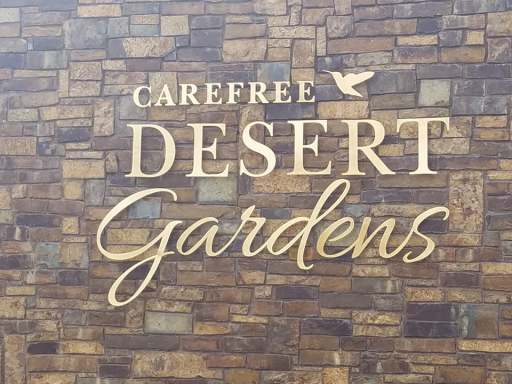 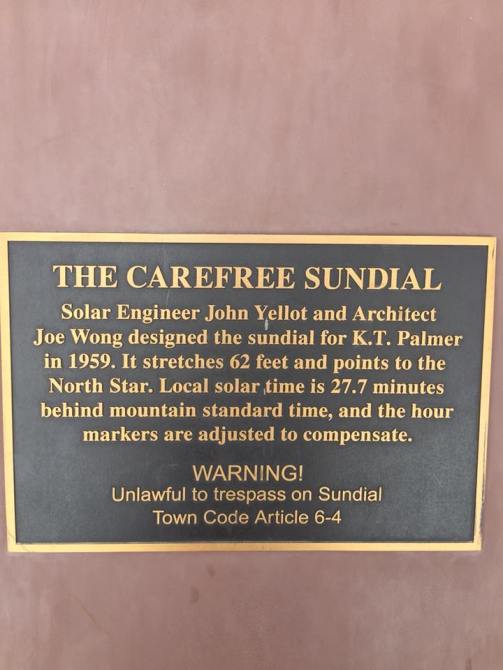 A trip to Cave Creek is fun with lots of interesting items for sale. Be sure and bring a large amount of cash to buy most of their offerings though! 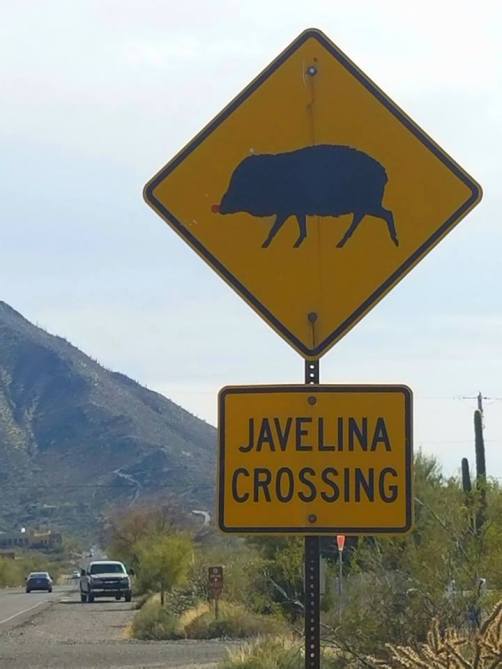 The food offerings around Phoenix, Scottsdale (I had someone from Gilbert say they call it “Snotsdale” for the snooty people) 😉 and Tempe are amazing.

My favorites, not necessarily in order:

Coconuts, which originated in Maui and now has two other locations in AZ.  Fish and Shrimp tacos were the delicious choices I had (ate there 3 times) and reasonably priced. 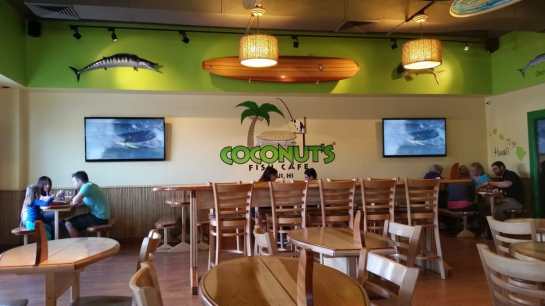 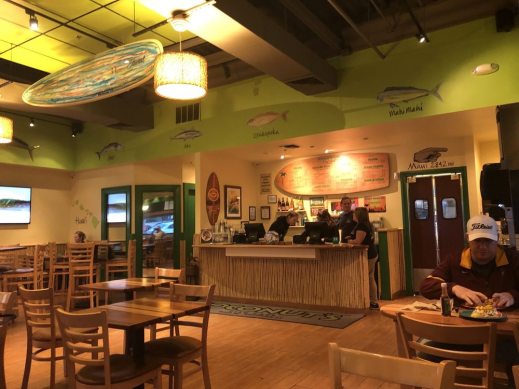 Andreoli’s Italian Grocer was a top 10 for me, everything is made on site, including all their pastries (sfogliatella is a MUST HAVE) and even their prosciutto and other meats .  Prices are spendy but you won’t be disappointed.  If you can, show up on Mondays or Tuesdays when they have a fellow strolling through playing the guitar and singing Italian songs.  He does requests so bring some favorite titles.  My friends requested Lazy Mary which was a fun, rousing song. Andreoli’s was showcased on Diners, Drive Ins and Dives on the Food Network. If you like Italian food you will LOVE Andreoli’s! 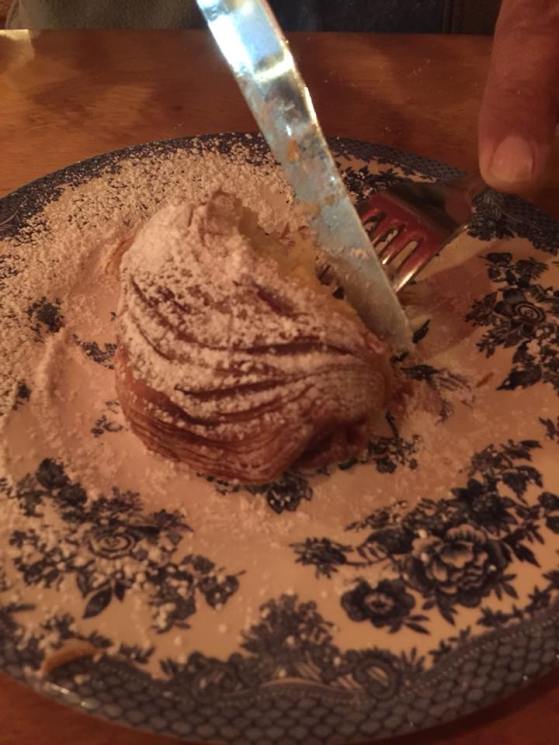 Speaking of Diners, Drive Ins and Dives… another place showcased is right down the road from Westworld.  Tom’s Thumb, also known as The Thumb is a combination gas station, car wash and detail shop, gift shop, wine cellar and BBQ restaurant.  “Just Your Average Gas Station” is the tagline.  Delicious smoked BBQ with a variety of sauces from mild to extreme, all done on location.  The chef and owner Kipp Lassetter is a former surgeon!

For Mexican, check out the upscale Sol Mexican Cocina.  Go for Taco Tuesday, great specials at great prices.  Including their house, made from scratch, Margarita!  Another great Mexican place is Mariscos Playa Hermosa, in Phoenix.  It’s a must visit, especially if you love seafood.

Don’t go here for the pizza (ok, but nothing to write home about) but for the entertainment.  Organ Stop Pizza in Mesa has an impressive Wurlitzer and pipe setup.  They have a few organists that play, we saw Charlie Balogh.  He played many well known favorites for children and adults alike.  He also took requests.

A little history on the Wurlizer and the Organ Stop Pizza restaurant: “A Wurlitzer organ was acquired from the Denver Theater in Denver, Colorado. In the theater, the Denver instrument had 15 ranks, or sets of pipes. The instrument was totally rebuilt, and the decision was made to enlarge the organ to 23 ranks for its debut in the new Mesa Organ Stop. In 1984 the Mesa Organ Stop was sold to longtime employee and manager Mike Everitt and his business partner Brad Bishop. Under the new ownership, improvement of the pipe organ became a high priority. Over the course of the ensuing years, careful acquisition of rare pipework and percussions were made, culminating in what is now the largest Wurlitzer pipe organ in the world. With the change in ownership, the restaurant continued to gain in popularity. Inevitably plans were made to move into a facility twice the size of the original in order to accommodate the ever increasing number of patrons and ever-expanding organ. This new mega facility, located at the corner of Stapley Drive and Southern Avenue, was designed specifically to accommodate the expanding scope and size of the Organ Stop Wurlitzer. Construction of the new facility began in May of 1995 and the grand opening was Thanksgiving weekend of that same year. In its new and improved location, Organ Stop Pizza and its Mighty Wurlitzer have come to be known as the biggest and best in the world as attested to by many of the world’s finest theater organists and, more importantly, the hundreds of thousands of patrons who visit each year. There are continuing efforts to make additions and improvements to the organ, endeavoring to fine tune the instrument closer and closer to perfection.” – http://www.organstoppizza.com 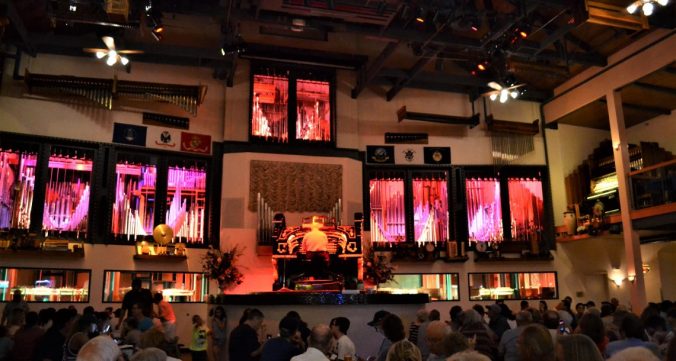 Next, onward to Casa Grande!